Offer a safe and confidential channel for workers to report any complaints or situations of retaliation by the factory after an audit is completed.

Worker interviews are an important part of a supplier audit to provide a complete picture of the factory’s operations. However, workers may be hesitant to share any issues with their working conditions while on-site at the factory, or they may face retaliation and negative consequences imposed by the factory’s management if they are seen to report issues or complaints.

Our Worker Hotline, proactive Anti-Retaliation Callback Service, and Worker Voice Surveys provides a confidential channel for interviewed workers to report any coercion, negative outcomes that occur as a result of their involvement in the audit, or complaints that they may not have been comfortable sharing with the auditor on-site.

During a supplier audit, workers may feel they want to share additional information even after the audit has been completed. There are situations when workers may feel uncomfortable reporting problems to the auditors in the factory: for example, if they have reason to believe that the factory management may penalize them. 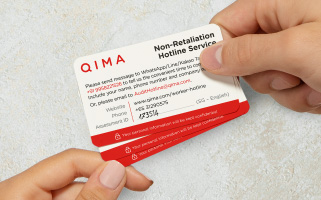 Our Worker Hotline is a safe and confidential channel that provides a direct line for workers to share their complaints with the end buyer of the products they make.

If a worker calls, they will be able to talk to a real person from QIMA in their own language.

Any reports made through the Worker Hotline will stay confidential and the worker’s name will not be shared with the factory management. They will however be passed on to the auditor and end buyer to provide a full and transparent picture of what is going on at the factory, and to help create a better working environment.

A concern when carrying out an audit is that factory management may punish a worker in some way for providing honest feedback on their working conditions. Our Anti-Retaliation Callback Service is designed to uncover any such occurrences to ensure worker safety and provide a complete picture of the working environment.

To make worker voice heard across global supply chains, QIMA has partnered with Ulula, a North America based social enterprise that equips organizations with technology, data and analytics to monitor risks of human rights abuses in order to create more responsible supply chains.

By integrating Ulula's solutions with QIMA on-site audits, we provide workers with a safe and effective mechanism for reporting any relevant information about their workplace, both reactively and proactively.

An example of a reactive report would be an account of abuse and threat in the workplace, or a violation of human rights, such as restriction of freedom or withholding of passports. By contrast, when acting proactively, a worker could report a perceived structural risk so it can be addressed before it’s exacerbated.

Ulula worker voice survey results are integrated into, and correlated with QIMA’s audit reports, giving you a comprehensive picture of your factories’ continuous improvement, which provides an additional degree of objectivity compared to a one-off spot check.

Why Use the Worker Hotline, Anti-Retaliation Callback Service and Worker Voice Surveys

Thank you - your inquiry has been sent.
We will come back to you shortly.